Leprosy, or Hansen’s disease, is an infectious disease caused by the bacillus, Mycobacterium leprae. The disease is slow-growing and minimally contagious (despite its historical reputation). Leprosy primarily affects the skin, peripheral nerves, mucosa and delicate membranes, particularly around the eyes, nose, and upper respiratory tract. As with any disease that causes nerve damage, its greatest danger is the risk of secondary infections due to untreated and unnoticed injuries. But leprosy is entirely curable as a result of a multi-drug (MDT) regime consisting of dapsone, Clofazimine, and rifampicin.

Despite the disease being easily curable, leprosy unfortunately persists throughout the world. It has since warranted the designation as a Neglected Tropical Disease (NTD), which is essentially a euphemism for a disease that largely affects the poor in poor countries (and is therefore ignored by much of the world). Still, a small number of organizations have committed themselves to fully eradicating leprosy:

NLR: Originally founded as Netherlands Leprosy Relief, the group now works toward the goal: until No Leprosy Remains. They are committed to the Three Zeroes: Zero Transmission, Zero Disability, and Zero Exclusion. NLR was also behind the development and release of the highly innovative SkinApp which aids peripheral health workers in timely diagnosis and treatment of skin diseases, especially NTDs that manifest with skin lesions such as leprosy.

The Novartis Foundation: while a part of Novartis International, the Swiss multinational pharmaceutical company, this foundation arguably exhibits some of the best funded and most innovative approaches to eradicating Hansen’s disease. The group was spotlighted in a NPR article recently.

American Leprosy Missions: a continuation of the faith-based-organizations which were especially popular during the nineteenth and early-twentieth centuries. 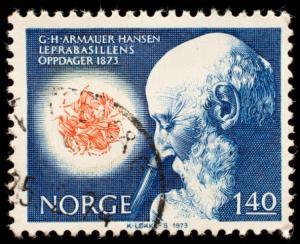 In fact, this is largely the reason why some scholars and researchers insist on the terminology of “Hansen’s disease” instead of “leprosy.” (Gerhard Armauer Hansen was the Norwegian physician who first identified Mycobacterium leprae) The label of “leper” is universally rejected and recognized as a derogatory, dehumanizing, and outdated source of stigma and discrimination. Organizations such as IDEA (International Association for Integration Dignity and Economic Advancement) have made it their mission to reverse such discrimination and stigma.

Finally, those interested in the history of leprosy in the United States should consult the National Hansen’s Disease Program, which also includes information about ongoing research and grant opportunities.

The International Leprosy Association has begun an exciting, multimedia history of those who have been affected by this disease.

Lepra is a UK-based international charity that continues to publish Leprosy Review, the only peer-reviewed, English language journal on leprosy–which can be read online for FREE.